A conference organised by

Centre for Ethics as Study in Human Value, University of Pardubice, Czech Republic

(to be followed by an edited volume)

Love is often considered a partial, even blind, sentiment that underlies only personal relationships. It is the basic value governing private life. Justice, on the other hand, is supposed to be the basic value governing our public life. Institutions, laws and practices in a liberal democracy aspire for justice that, surprisingly, also has the attribute of blindness; its nature is to look away from personal and sentimental ties and treat (and judge) everyone equally and impartially. Love and justice thus symbolise many classic dichotomies: partial vs. impartial, personal vs social and political, private vs. public, warm vs. cold, sentiment vs. reason, relational vs. individual, concrete and embedded vs. general and abstract. It has now become common, alongside the critique of the narrow focus of liberalism and liberal values, to question these sharp distinctions. We would like to develop the implications of this line of critique, and to explore both the place for justice in one’s personal relationships and the possibility of love playing a foundational role in social and political relations. Denying that love is purely a matter of philosophical psychology and justice purely a matter of legal and political philosophy we aim to connect them in a unified study of human life and action from the perspective of what is good: that of ethics.

An important line of inquiry here is that initiated by Martha Nussbaum in her Political Emotions: Why Love Matters for Justice (2013): The liberal values of a just society (freedom and equal opportunity) are not enough to ensure motivation to pursue its common goals and values and to curtail negative emotions such as envy and disgust directed to other people and groups. Citizens have to be encouraged in their love and attachment for their country, its ideals and goals, its institutions and leaders, its geography, their fellow citizens, etc. Are there, however, limits to such love? Where is the point in which worthwhile patriotism passes into dangerous nationalism and identification with one’s country into xenophobia and protectionism? Does not this attitude encourage hostility towards other nations, in which foreigners become suspicious strangers? Can the common humanity of all people be conceived as citizenship of the world?

A possible answer to the questions is to consider love as an ethical requirement rather than partial sentiment, following the traditional conception of love of one’s neighbour. Such love is not only the basis of good community relationships, but also a source of charitable responses (moved by compassion and pity) to other people’s misfortunes. We could ask whether these motives are more suitable for providing help than considerations of distributive justice. Should we help the weak and disadvantaged because we are moved by their misfortunes or because it is something we owe them or because they have a right for such help? Is there any difference if one moves from the personal domain to the social and political? Markedly different pictures of love-justice relationship present themselves depending on whether one understands justice as compensation for inequalities of luck, or as equal respect paid to every individual, or as something that involves love of a particular kind, be it attached or detached.

Another example of loving responses reaching beyond their traditional domain is their role in retributive justice. Is just punishment compatible with forgiveness and mercy? Can communication between the offender and the victim and restoration of their personal relationship substitute punishment? And again, is there a crucial difference between the personal and criminal domains (for example a misbehaving child vs. a criminal offender)? In what sense we “deal out justice” by punitive actions in the private domain?

An example of the value of justice penetrating into the domain of personal relationships are cries of the type: “you are not being fair to me!” “you don’t do me justice!” These cries do not only invoke fairness in the distribution of goods or equal chances. They call for a more objective judgment and appreciation of the person affected. They show that justice is a quality of judgment and vision as well as practices.

Last, there is a tradition in ethics that claims that the fundamental moral attitude is to accord all human beings the same absolute value. To consider someone valuable, however, is not a matter of rational respect for her dignity, but of (impartial) love. Only through love can one appreciate fully the humanity of the other, to see her as her fellow human being. Thus, Simone Weil and Iris Murdoch claim that love and justice are the same and Raimond Gaita claims that only the most loving person is able to see the equal human value of social outcasts.

For further information please see our Centre website or facebook page, or contact Ondřej Beran (ondrej.beran@upce.cz). It is possible to participate in the conference without presenting a paper. Should you wish to do so, please register at the same e-mail address by the end of August at the latest. Attendance is free of charge, but seats are limited. 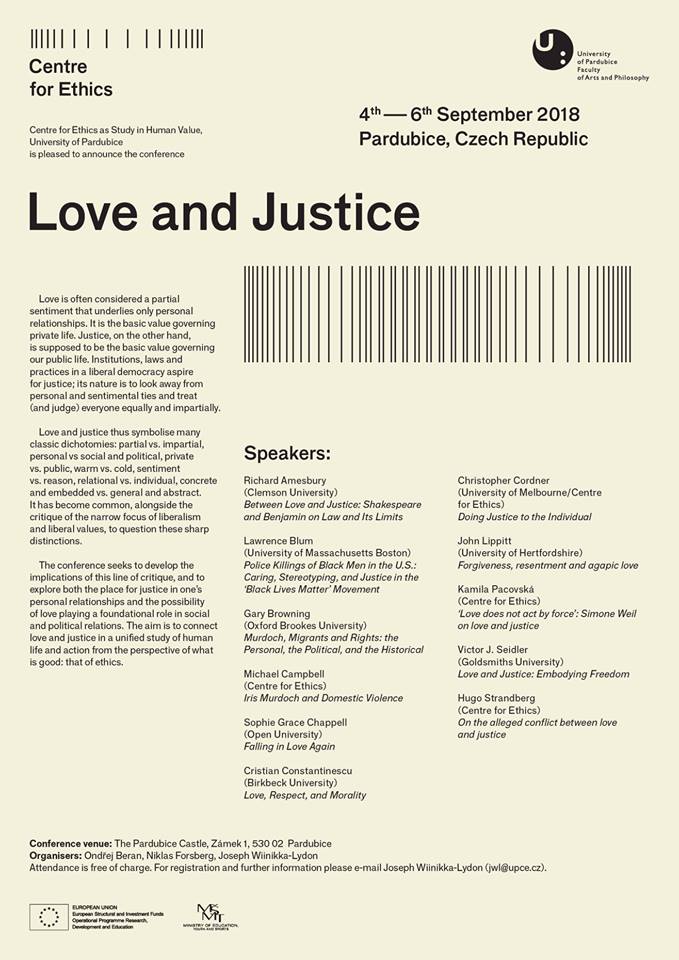